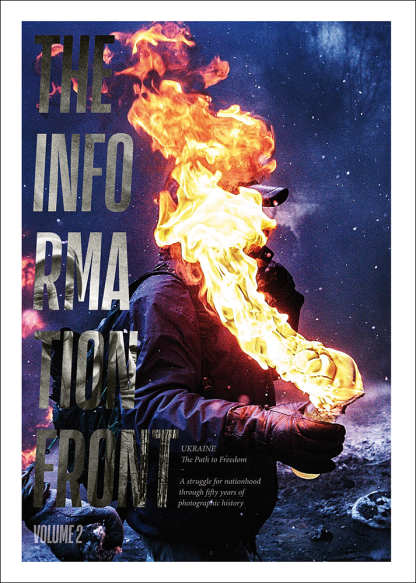 The Information Front, #2. Ukraine – The Path to Freedom

Volume 2 of The Information Front presents the wealth of Ukrainian photography over the course of five decades. It begins in the 1970s, at the moment when Ukrainian visual art began to publicly express its own language, and concludes with the war that engulfs the country in the present.

For bookshops and bulk buyers: please order only via our office. Contact: Maarten Schilt, schilt@schiltpublishing.com.

For centuries, Ukraine has been continuously fighting for its own identity, freedom, language, and state borders. The Eastern part of the country joined the then-forming Soviet Union after the revolution in 1917—1918, while Western Ukraine was joined by military force in 1939.

The Ukrainian Socialist Republic went through a long period of eradicating national identity and the formation of new images, symbols, propaganda and a new ‘Soviet’ identity. Old narratives were destroyed, historical facts were manipulated, and those who did not share the new ideology eliminated, literally or by silencing their voices through deportations and other means. When the Soviet Union fell, Ukraine declared its independence. On August 24, 1991, a new stage of development and restoration of a lost identity began.

‘Ukraine – The Path To Freedom’ looks at the period of the country’s independence, from the first attempts at a revolution through its photographic language in the 1970s, to the present day. It visualizes key events in the history of Ukraine and looks at the development of photography during this period. The exhibition and Volume 2 aims to show how the socio-political and artistic life in the country are intimately connected.

Both the show and publication consists of four parts, corresponding to four recent historical periods and offers the works of several generations of Ukrainian artists and photographers. It shows how photography acts on multiple social levels: as a method of recording changes, as a form of protest, a personal story, a reflection on events, and as political statement.

Art is a mirror of society and especially photography can be a means towards deeper cultural understanding and engagement. It tells us how Ukraine is travelling along a historical path of a struggle for freedom – for its borders, the right to exist, its culture and its future. As recent events prove, the price of this struggle is high.

The publication is a companion to the exhibition ‘Ukraine – The Path to Freedom’ hosted by Noorderlicht at the Akerk in Groningen, The Netherlands and pioneers an approach to photography from a Ukrainian historical perspective.

Only logged in customers who have purchased this product may leave a review.